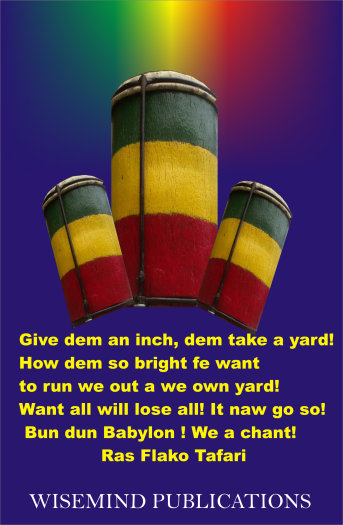 REASONING WITH THE INCIENT

My name is Keith Wilberforce Williams; I was working at Barnett Es- tate with two brethrens, whose names were Winston and Charles. These brethrens introduced Rastafari to I man; I have accepted from that time in 1960, and I became a Rastafarian from then until now.

In the time of my early tradition, my elder was Priest Brown who owned and operated the ‘Potters House’ at William Street in Montego Bay; other brethrens also sharpened my awareness of Rastafari.

HIS MAJESTY VISIT TO JAMAICA

The visit of Emperor Haile Selassie to Jamaica was a marvelous time. When the Emperor came, we the Rastafari in Mt Salem hire a truck that took us to the Airport in Kingston. This was a world wide experi- ence, it was so glamorous and nice because at the time of His Majesty’s visit, the airplane that carried His Majesty appeared out of the cloud exactly at 4pm, then came some sea birds out of nowhere, it was so amazing.

The airplane just landed without run off, the amount of hailing of Jah Rastafari! It seems like the earth shook, then there was a thunderous rain fall, with big drops like hail stones, when the drops hit you on your shoulder, you feel it, and it a short space of time the rain stopped, and the sun came out.

I travelled on the truck to the National Stadium and heard His Majesty speaking in Amharic with his interpreter translating it. I later returned to Montego Bay in the evening.